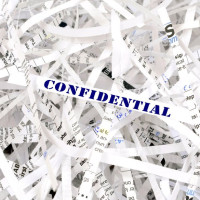 How not to dispose of confidential documents

After you shred your confidential documents, what do you do with them?  Police are investigating after some of the confetti at last week’s Macy’s Thanksgiving Parade in New York City was apparently produced from the confidential records of the Nassau County Police Department (NCPD).

Parade spectators reported seeing confidential information such as Social Security and license plate numbers, names of NCPD officers, information from arrest records, and even information about a motorcade for Mitt Romney when he was the Republican presidential candidate in the confetti that littered the streets after the parade.  From photos in the many, many news reports on this topic, it appears the confidential confetti was in the form of paper shreds from a strip-cut shredder instead of the more secure paper particles that a cross-cut shredder would produce.

According to New York TV station WPIX-TV, a NCPD employee brought the confidential confetti to the parade.  Needless to say, the force is reviewing its procedures for disposing of sensitive documents.  Meanwhile, according to a New York Post story, Macy’s uses “commercially manufactured, multicolored confetti not shredded, homemade or printed paper of any kind in the parade.”

It will be interesting to monitor this story, particularly the circumstances surrounding the confetti’s creation and use.

But regardless of how the story unfolds, there’s a lesson for all organizations here: it is not enough to shred confidential information – you have to shred it beyond the point of legibility and reconstruction – and you have to ensure the shreds are securely disposed of.

What will they think of next? “Unprint” a document

Maclean’s Magazine reports that the low-carbon materials processing group at the University of Cambridge have found a new technique for recycling paper.

Julian Allwood (group leader) and his collaborators have developed a process that can remove toner from printed paper so it can be used again – essentially an “unprinter”.  In a nutshell, the process uses very short pulses of laser light to heat up the ink on a printed page until the ink vaporizes.  With this technique, a piece of paper can reportedly be reused up to 5 times.

As discussed in a University of Cambridge research note, this new process offers promise for significantly reducing the amount of trees harvested to create paper.  And reusing paper could save an additional 50-80% in carbon emissions over recycling.

IM practitioners don’t have to worry about this technology appearing in office printers/copiers in the near future – commercialization is said to be a ways off yet.  But its certainly a technology to keep our eyes on and one which gives new meaning to the “paperless office”.