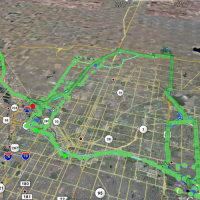 Managing GPS Data as a Record

Many organizations such as municipalities, utilities, construction firms, mining and resource companies, waste management contractors, and transportation and logistics companies have fleets of vehicles and large mobile workforces.  If you are an IM manager in one of these organizations, do you manage global positioning system (GPS) data as records?

Recently the CBC reported that 31 public works employees at the City of Hamilton were fired or suspended for time theft, breach of trust and neglect of duties after GPS records revealed they were not in actual fact working the jobs they were supposed to be working.  Instead, according to the Globe and Mail, they drove city vehicles to non-work locations such as shopping malls on the taxpayer’s dime.  Management staff are also being investigated and may face discipline for not exerting sufficient oversight.  Allegations of asphalt dumping (or its possible sale to homeowners) have not been proven although police have been informed of the materials discrepancy.

Meanwhile, the Toronto District School Board is planning to spend over $1 million to install GPS tracking equipment in their fleet of facility service vehicles to “increase oversight and efficiency of its roughly 900 unionized maintenance and repair workers”.  In addition to tracking routes and locations, the GPS system will also record data such as fuel consumption and vehicle speed.  TDSB management wanted to install this technology a couple of years ago but the Board wasn’t supportive.  The decision to proceed came after a 2012 Toronto Star investigation showed widespread problems and high costs for jobs.  The investigation also showed some workers weren’t where they were supposed to be during the work day.  According to Angelos Bacopoulos, the TDSB’s Chief Officer of Facilities, some employees were “leaving job sites, visiting bars and taking roundabout routes that decrease productivity”.

In both cases, GPS records were not the only means of tracking irregularities or improprieties.  It was discrepancies in work reports and financial data that first alerted management to the problem.  For example, one TDSB report showed a cost of $3,000 to install a single electrical outlet at a school because 76 hours were billed instead of the expected 4.  At the City of Hamilton, GPS records were used in conjunction with video surveillance to confront the workers.

Although these are examples of how GPS data can be used in labour relations matters, the process by which the irregularities and improprieties were discovered is very similar to that of legal discovery.  In fact, one can easily extrapolate different situations in which GPS data would need to meet discovery and admissibility requirements.  Does your organization consider GPS data to be records and do they meet your criteria for e-discovery?  If not, it may be time to think about it and to carefully plan the collection and use of GPS data given the employee privacy issues.